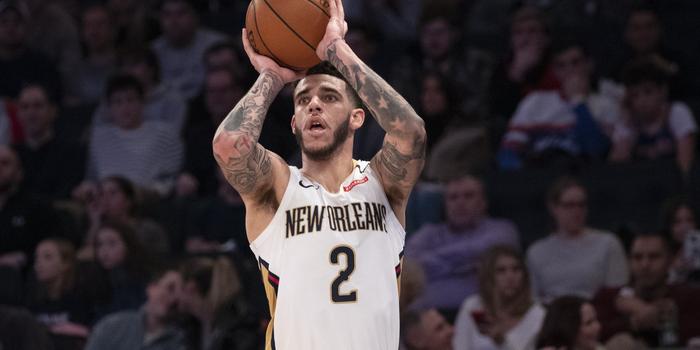 Lonzo is such an enigma

I don't really get why his freethrows are still this bad, how can the guy make 7 of 9 threes at one point and still be a 57% freethrow shooter?

Its a rhythm, mental and sample size problem. Hes only getting to the line a couple times a game.

I think it’s just the pressure you’re bound to feel at the line. When you’re running around trying to spot up for a 3 that’s probably the only thing going through his head. At the line, not so much.

how can the guy make 7 of 9 threes at one point and still be a 57% freethrow shooter?

He has absolutely no free throw routine. He just walks up to the line and flings that shit at the rim. Hopefully it's something he works on this summer.

He doesn't use ANY legs on his free throws, from what I remember seeing. He has a more sloppy version of Dwight's FT's, his arm isn't as straight either.

Middleton has no routine and hes shooting 90%

Middleton has always been a good shooter.

Middleton shot 26% from 3 his senior year of college. He was solid from the free throw line at 75 % but overall a bad shooter coming into the league

Middleton doesn’t need a routine if he’s shooting 90%. Lonzo is shooting 57.8% i don’t know if a routine will help him but he needs to do something about it

I think routines are super helpful for bad shooters.

Steve Nash had a routine. So get one.

Lonzo shot over 80% on FTs in HS on good volume, in college it broke and hasn't really been fixed

I think this was the first off-season he wasn't injured which gave him time to actually work on his shot; hopefully he'll do something similar and tweak his FT routine this coming summer.

Eh. Gyms get bigger. I bet a lot of people drop their percentage as they move up levels. It would be an interesting study

Lonzo went from 104/130 his senior year of HS, which is good for 80%, to 66/98 in college, which is 67%, to 32/71 his first year in the NBA, which is 45.1%. I don't know if others experience similar drops, but it sure seems ridiculous he dropped 35% on his FT before entering the NBA as he progressively faced better competition. Especially, when considering he was a better 3pt shooter and shot better from the field in college than he did in HS. He shot 55% (which includes a 5% increase in 2pt FG %) from the field and 41% from the 3 in college and shot 54% from the field and 36% from 3 in his senior year in HS. It's the only shot he had that wouldn't have seen limit placed by his form, yet it's the one that saw the most drastic decrease.

Part of it is probably the atmosphere (i.e. bigger crowds), too. Like how when Dwight was on the Lakers the first time they said he shot 80% from the line during practice.

Everyone shoots amazing in practice under no pressure.

Lonzo has been a good shooter for a long time, but it takes time to adjust to the NBA game. On almost 200 3s attempted in his year at UCLA, he shot over 41%.

I think he’s been working with a shooting coach. His shot form is more orthodox now

him and ingram shooting have really improved. Whoever the pelicans got on their staff, they need to keep em

What's wrong with Gentry? I genuinely don't know, I thought he was loved by all

Gentry's rotations are the main problem, dude takes out his best players in the 4th quarter and keeps them on the bench until the team is down 12 with like, 30 seconds left in the 4th. There was a game where lonzo hit a layup and a three and was benched for like the rest of the quarter. Shit like that makes everyone look at him saying "why?"

Most don’t care for him. Terrible at making adjustments, questionable lineups. I was fine with them keeping him for this year and letting it play out. Needed a perfect storm of things to happen to make the playoffs anyway and injuries piled up early on mixed with the toughest schedule and lots of new faces; too big of a hole to realistically climb out of. Speculation for a while has been that he’d take a front office role and they’d find their next person after this season. I’m hoping that’s what happens at least.

I don’t know how the pelicans will build their team around Zion going forward, but Lonzo absolutely is the perfect fit with him and should be part of their core.

It is imperative that they keep Lonzo, more than BI if the plan is to build around Zion.

Not saying that Lonzo is better than BI, but I can’t think of a better PG pairing for Zion except maybe Luka?

Lonzo's post entry passing is immaculate and the way he can loft a pass when Zion seals his man who tried to front him is immaculate.

what could have been...

I was absolutely shocked when I saw we made it past 4th pick. I think the general consensus in our sub was like 7-10.

Yeah, I don’t want to take away from the real improvements BI has made, but it just feels like there is a scenario where a year or two from now the fit with Zion doesn’t seem that great.

I hope he continues to grow as a facilitator, he showed more of it in LA than he has this season, he’s a little black-hole-ish now

I know it sounds weird but I think BI is too good of a player to fit if the Pelicans want to build around Zion.

Ingram would have to further improve his shot off the dribble from 3 and his handle for sure. At times they have shown flashes in the pick and roll of being really good. His upside is actually underrated imo because he still looks a little gimpy out there despite all the improvements. Physically I think there's room for growth just look at him a couple years ago or even last year. His base/core/balance is a lot stronger.

and that’s after barely having an off-season, too. I think his chemistry with zion will really improve when they have a chance to work together for a full of-season

Yea with Ingram already improving his 3 so much this year and being a pretty solid playmaker I see no reason why they couldn't have a monster 2 man game working in the pick and roll. The Pelicans will have some deadly pick and roll options with Zion, Lonzo, and Ingram.

I saw a couple plays last night where they worked. BI does his usual iso dribble, a second defender half commits to BI, he passed it to Zion for an easy layup. A good coach can definitely exploit BI's iso ability to give Zion space and easy layups.

Giannis shoots better than Brook this year with more attempts.

Danny went from 45.5% on 5.4 3PA last season down to 37.8% on 5 3PA this season with us. His defense has also been frustrating lately, lots of stupid reach ins that kill our momentum and put the opponents on Bonus a lot. The turnovers too when he tries to pass like LeBron or when he attempts to dribble lol

KCP's been outplaying him in all parts.

He gets called out literally every day in our sub lol

Green has been shooting more off-screen 3's this season. He's elite at spotting up but not that great at Korver/JJ style shots.

Well that means he'll be great next year so

Well yeah 45% was just unsustainable. Look at his career averages. There's a lot of variance in 3 point shooting and he just ran hot for a regular season.

4 seasons of shooting above 40% from 3 then fell of in 2016 but recovered to be above average for 2 seasons then had the amazing 45.5% last year but got back down to above average this season.

One of the players with the most appropriate nicknames. Icy Hot af

Not only that but he was extremely inconsistenct with his 3's during the raptors championship run last year. He rarely played down the stretch in the 4th and was benched by FVV.

KCP’s been phenomenal this season, offence, defence, and in transition, but Danny green hasnt been bad by any means. He moves the ball well and 37% is still a good percentage. Kuzma is definitely the weakest link in the rotation

That’s how you know Laker fans hate Kuz. How is he relevant to the conversation? Lmao they don’t even play the same position.

Btw, Green has definitely been bad for how large his contract is. He gets a pass because he usually makes the right decision, but he hasn’t been the shooter or defender we were expecting to get this season.

Take into consideration this is Lonzo first year with his new shooting form. His midrange game has improved aswell. I fully believe next years jump will be extraordinary with a healthy offseason of work with Zion !

Who coached him? I’m salty the lakers have very poor player development. Seems like every player that left improved significantly

I blame Luke Walton for everything. Really could've had a strong strong core and traded less for AD, but Luke was so ass.

He could be great if he learned how to drive and finish around the rim. It seems like shooting 3 pointers is the only way he can score right now.

He had 19 pts against the Lakers with 1/7 from 3. Most of his points were driving layups

I think he needs to learn to manage his pace. He’s incredibly fast and quick, but he can learn a lot about Jrue how he slows down and finishes with both hands. Give Zo time to learn how to shift speeds

I used to dislike the guy, but dudes been doing nothing but balling out and improving his game. Respect, I see the pelicans making a nice run in the playoffs in the next couple of years

Still had a lot more room to grow too. Excited to see him reach his potential

Makes me happy seeing Zo thrive, he’s got so much talent

I know our record is great but I can’t help but feel that we would’ve been better off with Lonzo instead of Kuz.

He solves our critical problem in lack of playmaking outside of LeBron and defense in our guards.

I’ve been shouting from the rooftops that we kept the wrong kid. Kuz isn’t going to flourish here with his position so crowded.

You wouldn’t have AD if you didn’t trade Lonzo.

Well yeah. Lonzo is a huge talent. But Kuz was making much less so they could keep him and still have money for a third max slot. Of course they didn't use it so now it looks pretty bad. I think it was okay to make that trade but I don't understand how the Lakers had to give up so many picks.

Zo and BI were mandatory for salary matching, I think. The only flexible parts were Kuz/Hart.

If Lonzo can fix his shot, there's no reason to be turned off on Lamelo's fg% as a prospect

Next season: Lonzo Ball is shooting better from the free throw line than Lebron James